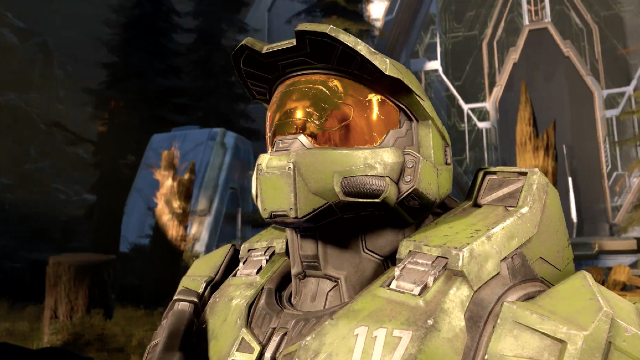 A new cinematic trailer launched today for Halo Infinite – and it zeroes back in on Master Chief. After taking more of a back seat in Halo 5: Guardians, the last mainline entry, Chief is back front and center. The launch trailer sets up Infinite‘s story mode to be a dark and moody affair by lamenting on all that Master Chief has fought for — and lost — in the past five entries.

Yes, this latest Halo Infinite footages turns away from the multiplayer mode that’s out now, and shows off the story mode in all its beauty.

The opening voiceover, which seems to be from Cortana, heavily focuses on Chief’s mortality, reinstating once more that he’s just as human as we are. It then launches into an action-packed montage of space battles, before outlining the threat of the Banished. This alien race are set to destroy the Earth’s Halo ring, and Chief puts himself forward as the only one to stop them.

We then get a decent look at Halo Infinite campaign gameplay. Master Chief combines gunplay with melee-based axe swinging to take out alien enemies in several fast-paced duels. We also get a look at the game’s destruction mechanics, as he grapples debris into a petrol tank to cause an explosion on the battlefield.

Master Chief’s task is no easy feat, though, as the plethora of enemies is astounding. We see glimpses of the Convenant brutes that  he’ll have to put down, who wield two-handed weapons and bounce around in battle. That’s on top of general grunts, and an all-encompassing boss fight against the leader of the Banished, due to happen towards the game’s end. It hints that this could be Master Chief’s toughest battle yet — perhaps even his last — making the wait for Halo Infinite feel even longer.